Written by myTuner on June 9, 2017 in Announcements and Updates . 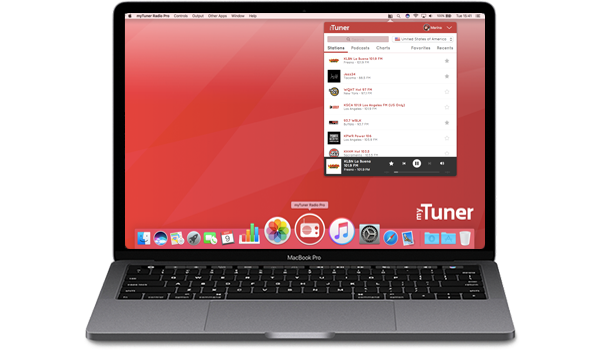 We have released a major update for myTuner Radio app for Mac. The new version comes with a redesigned UI and it's compatible with MacBook Pro Touch Bar. To celebrate this new release the Pro version is 50% OFF (only $4.99), so you can download it right away from the Mac App Store.

- Touch Bar compatible
You can use the new MacBook Pro Touch Bar to add/remove favorite stations, change stations (in the favorites list), play/stop a station, go to the next/previous station, change volume and much more;

- New UI
The user interface is now much cleaner and intuitive while maintaining its simplicity from the previous version;

- Performance and Search improvements
We have solved a few performance issues, most of them reported by our beloved users, and enhanced the global search capabilities;

- Login & Sync between devices
One of the most requested features was the possibility to sync the favorites and recent lists across multiple devices. Now, by using the same login on your iOS or Android app, all of your myTuner favorites and recents will be synced on your mobile apps and on your Mac;

- Dock icon
We added a dock icon to the app, so now all users can easily switch between myTuner Radio and other Mac apps without going to the Menu Bar.

myTuner Radio Pro for Mac is currently available for $4.99 (50% OFF - this weekend only) in the Mac App Store in the Music category.

We also feature myTuner Radio Free for Mac (an Ad supported version) available for FREE in the Mac App Store in the Music category.

Both versions support myTuner Radio's favorites and recents syncing across iOS (iPhone and iPad), Android (smartphones and tablets) and Mac.

Discover the new features of version 2 on myTuner Radio for Mac:

Learn About the Oceans with these Podcasts