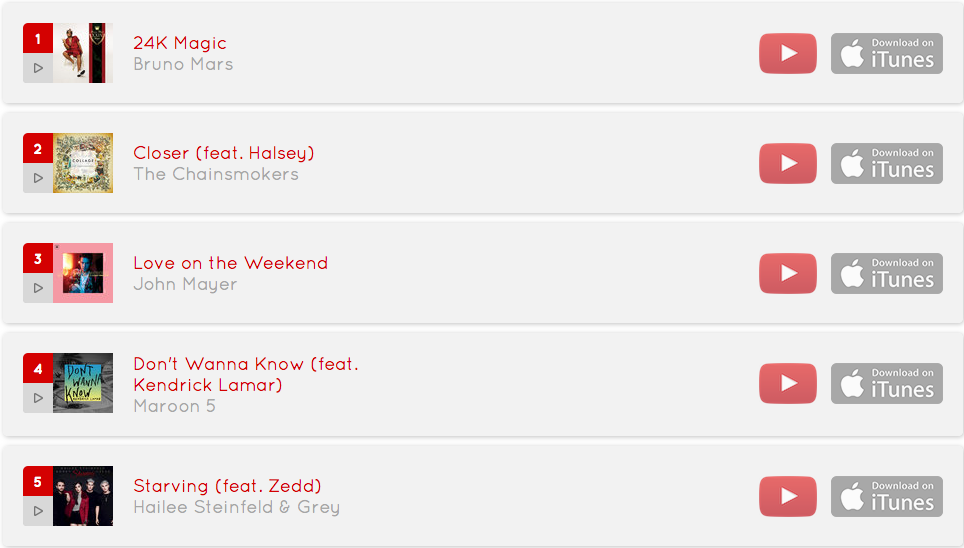 myTuner Radio knows that you enjoy good music and this is why it brings you the top music charts from  120 countries around the globe. You can check this on our website and filter country, genre, local artist, most played on the radio today’s tops and last month. The top music charts can also be checked on the myTuner Radio app that is available for iOS, Mac, Android and also on the Apple TV.

The current top 5 most popular local artists in the US are twenty one pilots, Bruno Mars, The Weekend, Nicki Minaj & Rihanna and Drake. When it comes to what plays the most on the radio, Ozuna is on first place with “Te Vas”, Tory Lanez in second with “Luz”, twenty one pilots with Heathens in third and the Zaperoko del Callao orquestra by La Revancha is in fourth, followed by Bruno Mars’ 24K in fifth place respectively.

On the iOS and Android app you can share the charts hits you’re listening to with your friends, so you let them know the brand new songs of the moment and which ones you like the most. Both the app and the website give you the chance to listen to a 30s sample of the hit and in case you want to buy it, just tap the purchase button and it will redirect you to the Store (iTunes or Android Store) to buy it. But this is not all, you can also save your favorite hits, in order to listen to the sample or download it later.

The Top Music Charts by myTuner gives you an endless list of possibilities for you to check. Curious about whom will be the listeners’ favorite artist next month? Just check it on myTuner’s website and stay up to date with the top music charts we have to offer you ;)