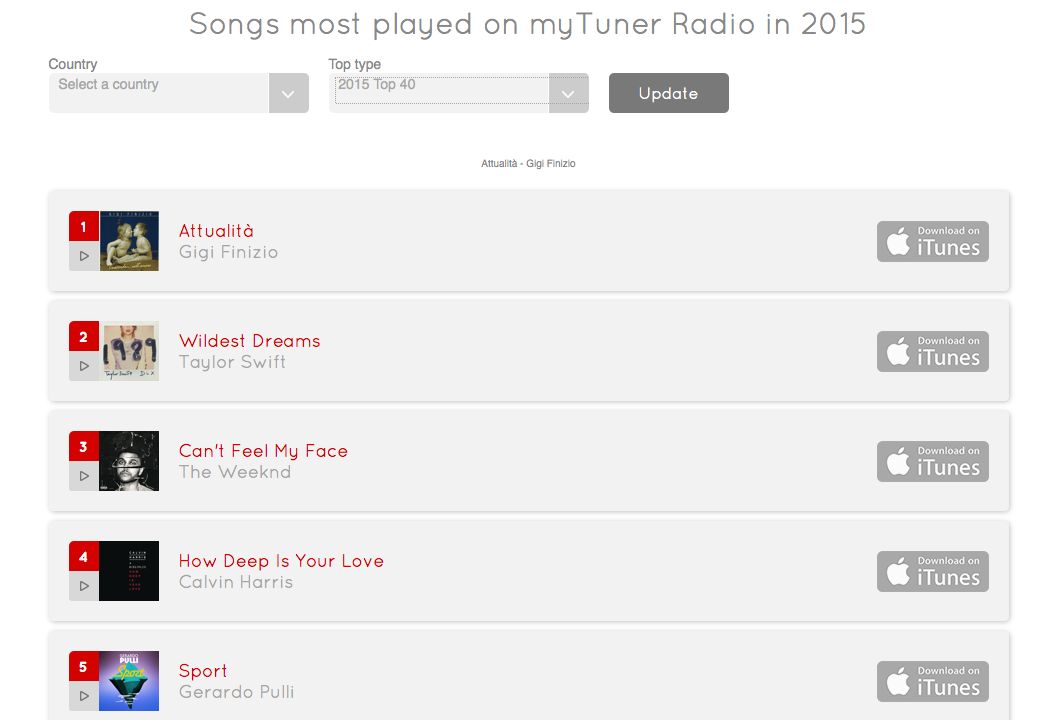 The Top 40 Songs is a shorthand created by the music industry for the most popular songs on a specific genre, or the best-selling, or most frequently broadcasted popular music. The term appeared associated to a radio format on the 1960’s. These days, America Top 40 Songs, Ö3 Austria Top 40, Dutch Top 40, Los 40 Principales, The Official Chart, The Net 40 are just some examples of the many Top 40 songs that currently exist on different countries.

On the other hand, the Top 40 songs most played on myTuner radio last month were “Cómo Te Atreves” by Morat, occupying the first place, “Geometría polisentimental” by Fangoria in second, “Gafas de Rosa” by Estopa on third place, “Love Yourself” by Justin Bieber on fourth place and “Cake by the Ocean” by DNCE followed in fourth place, and “No” by Megan Trainor in fifth, among many others.

When it comes to local artists, the Top 40 songs that were most played last month were Justin Bieber’s “Love Yourself”, on the first position, followed by DNCE with “Cake by the Ocean” in second place, Meghan Trainor with “No”, on third place, Nicki Minaj & Rihanna (feat. Drake) with “Work” on fourth, and Lukas Graham with “7 years” on fourth place, followed by many, many others.

Additionally, if you enjoy any of the Top 40 songs you can download them using myTuner radio’s website. The Top 40 songs can also be checked on myTuner’s platform, on our website and they are also available for iOS, Android and Mac.

The term "top 40" gradually became part of the vernacular associated with popular music, from the 160’s till now and surprisingly it never goes out fashion, especially when played on muyTuner Radio platform or app.

Listening to Radio Online is the New Trend!