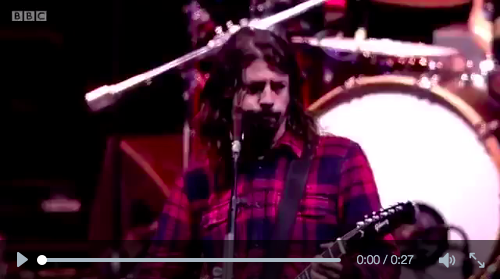 Dave Grohl, from Foo Fighters, dedicated a song to Taylor Swift during a concert in BBC Radio 1’s Big Weekend.

“Congregation” was the music that the artist choose to honor Taylor. The song was written and recorded in Swift’s hometown of Nashville.

“I'm officially obsessed, she might want to get a restraining order because I'm all about Swift. I'm going to dedicate this song to Taylor Swift, how about that? This one goes out to my opening band, Taylor Swift.”

"I'm officially obsessed, she might want to get a restraining order" - Dave Grohl is a @taylorswift13 fan too guys! https://t.co/aaP4iwPfJ5